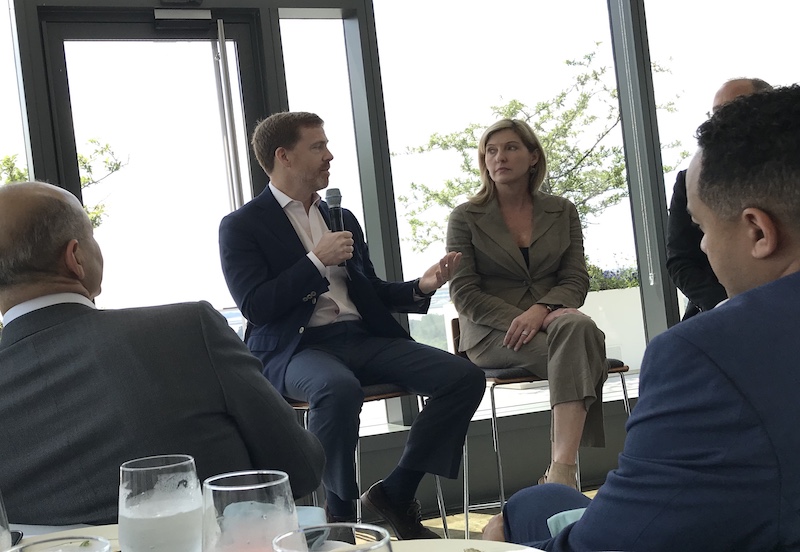 The Amazon Effect on the DMV

Amazon Head of Worldwide Economic Development Holly Sullivan said that the company is not a “typical headquarters” company, and the result will not only benefit the National Landing neighborhood, but the entire Washington, DC metro region.  She made her remarks while participating on a panel with JBG Smith CEO Matt Kelly for a VIP Luncheon at the first annual CRE Connect Summit at the Wharf on Thursday.  Companies like Google and Under Armour locally are well known for their all-encompassing campuses, and many recent tenant construction projects include a design in which employees can eat, workout, nap, and even have happy hour all under one roof.  Amazon, however, does not treat its headquarters as its own unconnected city.  “We push our employees to go out into the neighborhoods,” Sullivan said, rather than including everything they would need on campus.  In choosing Arlington, Sullivan praised JBG Smith for its vision.  “They are making investments to change Crystal City.  Amazon will take it to the next level.”  JBG Smith CEO Matt Kelly added that Amazon’s approach to HQ2 was “music to our ears.  They look at smart growth.  They are self-aware and understand the impact they can have.  We want all those people out and about patronizing all the other retail too.”

As the construction industry knows first-hand, Kelly said JBG Smith is already underway with its first phase of roughly 110,000 square feet of retail repositioning, Central District Retail.  Following the completion of the retail spaces, JBG Smith also has about 750 units of new housing on the corner of 18thand Crystal Drive, which will include another 30,000 – 40,000 square feet of retail on the ground floor.  “Because we own so much real estate in that neighborhood,” Kelly added, “we’re being very intentional about the types of retail that we have there for the purposes of adding value to the entire neighborhood; so we can do things that on its face that might not be the most economic deal, we’re opting for retailers that may not have as much credit or may not actually pay as much rent but they’re the type of concept that we know that neighbors are really going to value.  We’re being very strategic about how we merchandise the space and where we put those kinds of retailers.”  Kelly expects the amount of retail to quadruple the amount that is currently on Crystal Drive, and they will be adding somewhere between 4,000 and 5,000 apartment units over the next five to ten years in national landing.

Sullivan noted that Amazon will add 400 jobs by the end of this year, and then 750 to 1100 jobs annually, to total 25,000 in the next 10-12 years.  The corner of 18thand Crystal Drive will serve as the core of their space, as Amazon will occupy two of those buildings before the end of the year.  Amazon will be “totally gutting” the third building on that corner and will move in next year.  The next phase, which was submitted to Arlington County on Thursday includes two million square feet, and 50,000 square feet of retail.  Those buildings Sullivan expects to occupy in 2023.  The addition of space will “really help us start ramping up our headcount hiring also” she said.  Thirty to forty percent of new hires will be in the technology sector.

From an infrastructure perspective, Kelly pointed out that almost all of the projects in the “’Amazon package’ were already on the drawing board, already had buy-in, were already identified as needed, identified as prioritized, but just weren’t funded.”  Adding an employer like Amazon who will be bringing 25,000 new jobs means a new tax revenue stream so, “we have an inflow of new taxes that will fund these projects.”  Kelly said that, the cumulative effect of adding the investments that “Amazon’s making in their buildings, the investments JBG Smith is making in new buildings, the investments the state and county are making, it’s almost five billion dollars going into the neighborhood.  It’s staggering, and it will be a total game changer.”  The infrastructure investments will include a pedestrian bridge 700 feet long from Reagan Airport to Crystal City, two new metro entrances and the lowering of Route One to grade.  Kelly pointed out that Virginia Tech’s Innovation Campus will also add a “pipeline of well-trained employees for other employers not just Amazon.”  Both Kelly and Sullivan noted that Amazon’s presence will bring a wealth of other tech and Amazon “trailer” companies to the entire region.  Sullivan said that if Amazon employees move on from the company, they typically stay within the market they are already in, which will mean a long-term gain in the “culture and dynamic, and the kind of talent that will continue to grow in the entire DC Metro.”

Other News and Notes:

-Amazon will have one central parking garage with a parking space ratio of one to one thousand employees. Sullivan noted that 60% of Seattle’s Amazon employees do not use a car to get to work.

-Amazon’s buildings will be designed to LEED Gold

-JBG Smith hopes to use some of its own real estate to help the Virginia Tech Innovation Campus test new building systems, AI driven technologies, and robotics to find money saving and sustainable innovations.

Capitol Drywall is a proud sponsor of the CRE Connect Summit.  For the inaugural year, 75 percent of the CCS’s proceeds benefit The Lourie Center for Children’s Social & Emotional Wellness, a “private, non-profit agency with a mission to improve the social and emotional health of young children and their families through prevention, early intervention, education, research and training.”